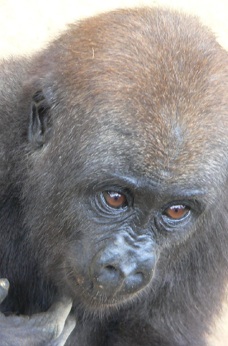 World forests are home to a large number of the world's plant and animal species, including many endangered species. They are the habitat for about two-thirds of terrestrial species. As forests are cut down, many species are doomed to extinction. Some rainforest species can only survive in their natural habitat.
Tropical rainforests support the greatest diversity of living organisms on Earth. Although they cover less than 2% of Earth's surface, rainforests house more than 50% of plants and animals on Earth. Here are some examples of the richness of rainforests:
- rainforests have 170,000 of the world's 250,000 known plant species
- the United States has 81 species of frogs, while Madagascar which is smaller than Texas, may have 300 species.
- Europe has 321 butterfly species, while a park in the rainforest of Peru, Manu National Park, has 1300 species.

According to the IUCN there are now almost 45,000 species considered at risk of extinction. Ourclosest relatives in the animal world: chimpanzees, gorillas and orangutans, are destined to become extinct within the next few decades if we continue to destroy the forests that host them. Every day, 50 to 130 speciesbecome extinct.We are facing the most dramatic wave of extinctions since the disappearance of thedinosaurs 65 million years ago. An ecological disaster is happening at an unprecendented rate; previous crisis played out over millions of years, and in the presence of natural disasters.